The Urine analysis is frequently used in all types of medical settings: hospitals (ER, ICU, Inpatient floors), urgent care, and outpatient offices. In many cases, correct evaluation of the urine is quintessential in making the appropriate diagnosis. To provide additional data, many hospitals run the urine through a microscope, giving you exact details on the contents within the urine, and quantifying the results. With this article, you will be able to educate yourself on how to interpret and evaluate the standard UA with Microscopy. 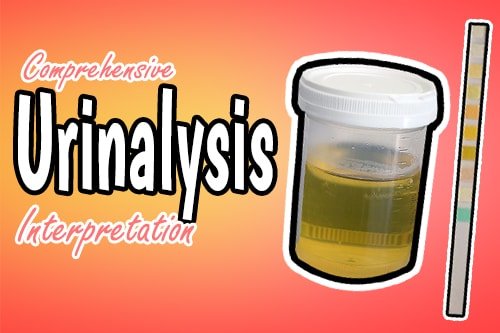 Before you even dip the urine or send it to the lab, the urine can tell quite a bit about the patient just by using your God-given senses.

The color of the urine analysis is the easiest way to determine someone’s hydration status. Surprisingly, it can indicate other aspects of health as well.

Yellow-Amber: Normal urine varies from very clear yellow to a darker amber color. Generally speaking, the less hydrated you are – the more concentrated your urine is with nitrogenous waste and electrolytes – thus darker urine. The more hydrated you are, the more dilute it is, leading to clear yellow urine. The first void of the morning is typically darker and more concentrated – this is normal. However, darker urine throughout the day should prompt an increased need to drink water.

Red: When we see red urine – we typically think of blood. And that may be the case in many different situations such as kidney stones (nephrolithiasis), UTIs, or glomerular damage. As little as 1mL of blood can cause a color-change, and the presence of red urine does not automatically mean large amounts of blood. Rhabdomyolysis can also cause myoglobin in the urine which has a red-brown appearance as well. However, there are various other factors which can cause red urine including certain foods such as Beets, Blackberries, and rhubarb; as well as different medications such as Propofol, Chlorpromazine, or Ex-Lax.

Orange-Red: You may see a neon orange-red from the antibiotic Rifampin used in the treatment of TB, or phenazopyridine (pyridium) used to treat bladder burning and discomfort during a UTI.

Other crazy colors: Other foods, drugs, and disease processes can turn urine every color of the rainbow. Certain UTIs can cause Green or purple urine, Fava beans can cause brown urine, amitriptyline or IV promethazine can cause blue urine. While these are very interesting, they are also super uncommon and you probably don’t need to commit them to memory.

Urine turbidity is how clear the urine is. Cloudy urine is very turbid, and clear urine is… well clear. When we see cloudy urine, we first think of infection which is very possible. Other causes of cloudy urine are casts, protein, and/or cellular debris from damaged kidneys.

Yes, your nose can detect more about urine than just detecting if the patient recently ate asparagus.

Urine has somewhat of an aromatic smell, and stronger-smelling urine tends to indicate dehydration (concentrated urine). Infections tend to have a very distinct foul-smell of bacteria which is difficult to describe, but does smell like ammonia as the bacteria often split urea to form ammonia. Sweet-smelling urine may mean spilling of glucose into urine from hyperglycemia. Lastly, If the urine smells like feces, a fistula might have formed somewhere between the GI tract and the Urinary tract.

Nah I’m just kidding – but did you know they used to taste urine to detect glucose in the urine?…. GROSS

The specific gravity is how dilute or concentrated the urine is. The normal range for this is 1.005 (being very dilute) to 1.030 (very concentrated). This can give the interpreter a pretty good idea of hydration status during the unine analysis process.

pH is a chemistry acronym which stands for potential of hydrogen. The more hydrogen ions there are, the more acidic something is. The pH scale runs of 0-14, with lower numbers being more acidic, and higher numbers being more basic. Normal urinary pH tends to be about 6 but runs as low as 4.5 and as high as 8. Because the kidneys regulate your acid/base balance, any change within the body should show up in your urine. However, various different disease processes can interfere with your kidney’s ability to do this effectively.

The urine normally has <150mg/day of protein and is undetectable on a dipstick, but when this level exceeds 300mg/day, it will show up on a dipstick. The dipstick is specific for albumin (a type of protein). Any damage to the glomerular basement membrane will let albumin and other larger particles to pass through the membrane and into the urine. This is typically used to evaluate kidney damage in diabetics, people with Congestive Heart Failure (CHF), or other causes of kidney damage.

When protein is present in the urine analysis, it is transient (meaning its temporary), and are benign. Potential benign causes include dehydration, emotional stress, fever, heat injury, inflammation, intense activity, acute illness, or an orthostatic disorder. All other causes of proteinuria involve the kidney – specifically the glomerulus or the renal tubules. Damage can cause proteins (which are generally larger) to pass through where they normally wouldn’t.

Some common causes of glomerular proteinuria include Diabetic nephropathy, lupus nephritis, preeclampsia, various infections (HIV, hepatitis B, post-streptococcal glomerulonephritis), certain cancers, and certain drugs like Heroin, NSAIDs, and Lithium. Some causes of tubular proteinuria include interstitial cystitis, Sickle-cell, and nephrotoxicity from NSAIDs or antibiotics like aminoglycosides.

The test for heme is very sensitive and can detect down to 1-2 RBCs/HPF. Thus, a negative dipstick theoretically excludes hematuria (blood in the urine). There are many potential causes of hematuria including UTIs, STDs, trauma/irritation, glomerular damage, coagulopathies, kidney stones, and malignancy.

Nitrates are present in the urine at baseline. Some species of bacteria, specifically of the enterobacteriaceae species (E. coli, Klebsiella, Proteus, Enterobacter, Citrobacter, and Pseudomonas), release an enzyme called nitrate reductase which converts urinary nitrate to nitrite.

When serum glucose spills into the urine – this is termed glucosuria. Typically, this does not occur until the kidney glucose threshold is reached – which is around 180mg/dL. As you can tell, this can be useful for evaluating hyperglycemia in the setting of diabetes. However, periods of stress or fever have been known to cause small amounts of glucose within the urine as well.

Ketones are released from fat cells when fat metabolism is increased. Most notably this occurs with DKA on a massive scale. However, ketones may also be present in low-carb ketogenic diets when dietary carbohydrates are kept below 50 grams per day, as well as in the setting of starvation (such as during a acute illness).

Urinary bilirubin may be present in low amounts, but increased levels are due to abnormalities of bilirubin metabolism or liver function. Other causes include hepatitis, hepatobiliary obstruction (gallstones), hemolysis, liver parenchymal disease, constipation, intestinal bacterial overgrowth. Must be tested immediately as bilirubin is unstable, especially when exposed to light. 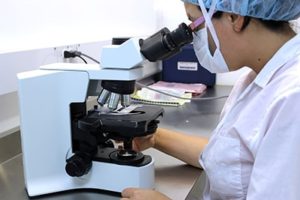 Bacteria are NOT normally found in the urine as it should be a sterile environment. If found, it can indicate infection or contamination.

WBC: 2-5 WBCs/HPF or less is normal within the urine. If higher, indicates possible infection, inflammation, or contamination. Most of the WBCs found in the case of infection are neutrophils.

Casts are tube-like protein structures made of of various cells. Low urine pH, low urine flow rate, and high urinary salt concentration promote cast formation by favoring protein denaturation and precipitation. The presence of casts, other than hyaline casts, represents pathology within the kidney itself.

Hyaline casts: These can be present in normal healthy adults and are nonspecific. They can be found after strenuous exercise or dehydration, as well as with diuretic use.

WBC casts: Uncommon, but when present is usually seen with tubulointerstitial nephritis and acute pyelonephritis, but also seen with renal tuberculosis and vaginal infections.

“Muddy-brown” granular casts: are diagnostic of acute tubular necrosis, the leading cause of Acute Kidney Injury.

Hopefully this gives you a pretty good idea of how to interpret the urine analysis. Whether you are a nurse, advanced practice provider, or physician, this skill is important to have and can aid in adequate patient care delivery. If there are any other diagnostic interpretations you would like to see, please leave a comment below! 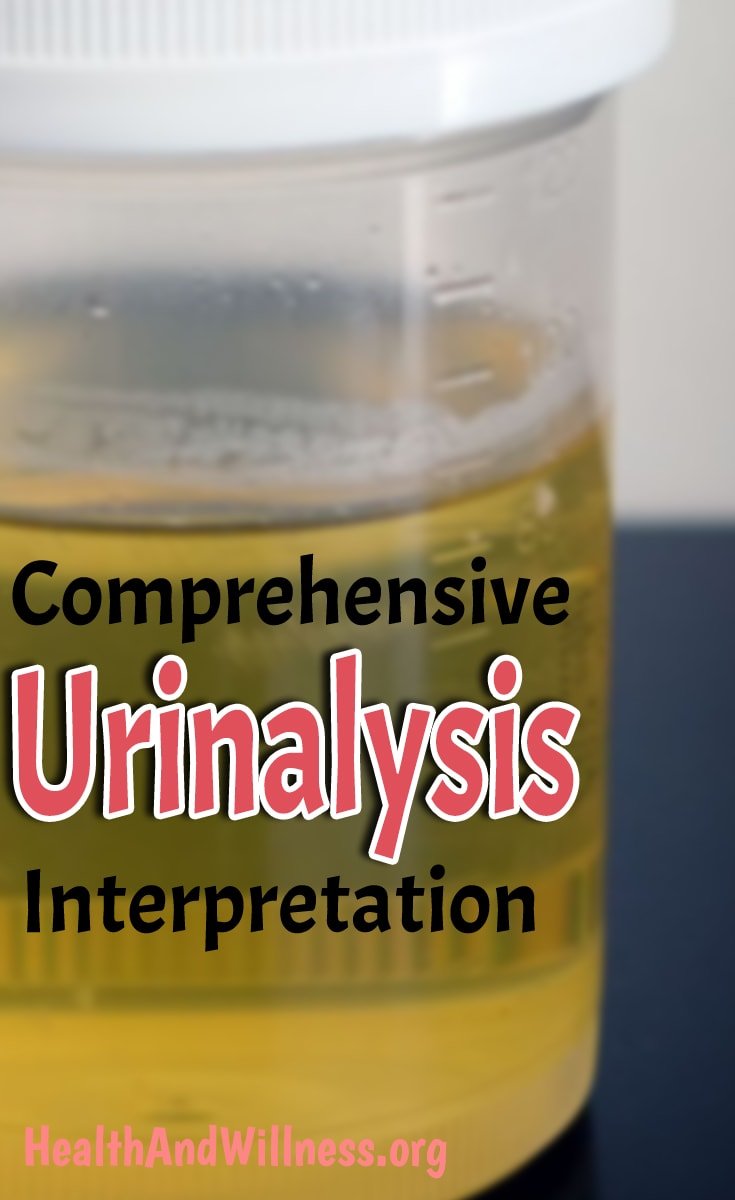