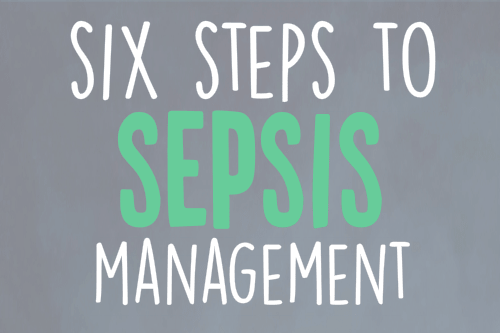 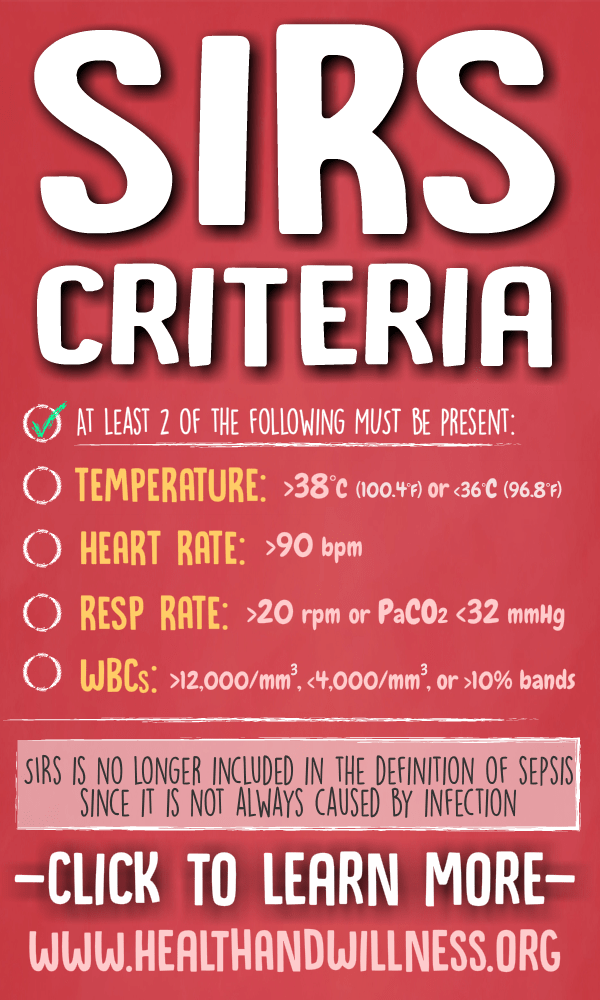 Sepsis is not a specific disease but rather a clinical syndromewhich represents the body’s response to severe bacterial infection. Sepsis is very common. In fact, within the hospital, you will take care of patients with sepsis in any department. Sepsis is a very serious condition with a poor prognosis. As the medical team suspecting and treating sepsis – there are important management steps that need to be taken in order to maximize patient outcomes and save lives!

Early sepsis– while not clearly defined – is the presence of infection and bacteremia – which can and likely will progress to sepsis without intervention. Sepsis used to be identified using SIRS criteria– Systemic Inflammatory Response syndrome. This syndrome is defined as the presence of at least 2 of the following 4 clinical indicators: Fever >38C or <36C, HR >90bpm, RR > 22/min or PaCO2 <32 mmHg, or WBC >12,000/mm3, <4,000/mm3, OR 10% BANDS. Once SIRS is identified with suspected source of infection – sepsis diagnosis was met. However, the definition of sepsis has changed with 2016. Sepsis is now is defined as life-threatening organ dysfunction in response to infection. Organ dysfunction, usually from hypoperfusion, can be evidenced by hypotension, altered mental status, tachypnea, or increased sofa score by 2 points (see below).  Septic shockis defined as those patients who have received fluid resuscitation and still have a MAP <65 mmHg and a lactic >2.0 mmol/L. These patients require vasopressors and should be monitored in the ICU.

Sepsis can be very serious and even fatal. Because of this – it is important to kn ow the steps to take in sepsis management. Performing these correct steps can literally mean the difference between life and death.

Initial management should include investigating the extensiveness of their infection, and applying initial measures to help them. After vital signs are taken an IV should be established and lab work drawn. If the patient’s blood pressure is low – consider starting 2 large-bore IVs. Be sure to draw at least 1 set of blood cultures per IV site (up to 2) as this will need ordered in all sepsis patients. Make sure the blood cultures get drawn before antibiotics are started.

Diagnostics should investigate the source of the infection – sometimes it is not obvious. If unsure – it is a good idea to obtain a urinalysis with culture to r/o UTI and a Chest x-ray to r/o pneumonia should be ordered. A wound culture, sputum culture, or abdominal imaging may be ordered if clinically indicated. Blood work will usually include blood cultures x 2, CBC with differential, CMP, and a lactic acid level. Sometimes in severe cases, an ABG can be ordered to evaluate acid-base status.

Lactic acid levels are very important in sepsis. Lactate is released from cells when they are forced to utilize glycolysis instead of the Kreb’s cycle (throwback to Cell Biology!). This means that there is decreased tissue perfusion due to decreased volume, increased oxygen demand, and decreased oxygen delivery. Lactic levels correlate with severity of sepsis.

Apply oxygen at 2 L/min unless contraindicated – titrate if SPO2 <92%. During sepsis, oxygen demand increases and delivery diminishes. Supplemental oxygen will help put less stress on the body and may help diminish lactic acidosis.

The qSOFA (Quick Sequential Organ Failure Assessment) score is now starting to be used as a clinical tool for sepsis. This is usually used within the hospital to stratify the mortality of patients with sepsis (see infographic for more details).

Fluid resuscitation during sepsis is the staple of sepsis management. Evidence shows early fluid intervention decreases mortality. There is such a massive need for fluid because during sepsis there is poor tissue perfusion and often hypovolemia. To correct this – large amounts of fluids are needed.

Typically, 0.9% normal saline is used 9 times out of 10. The recommended standard volume is a 30 ml/kg bolus. So if a patient was 70 Kg, they would receive 2100 ml total. This should be given as quickly as possible – as tolerated. This amount is typically given to anybody recognized as possibly having sepsis, but is especially indicated in those with sever sepsis, fast heart rate, or low blood pressure. Traditionally even larger amounts of fluids were given (5-6 Liters), but several randomized control trials showed no difference in mortality compared with the now-recommended 2-3 Liters.

Exceptions to receiving this bolus includes those with active pulmonary edema. Those with a history of Heart Failure, end-stage renal disease, or severe liver disease should still receive fluids. However – it is recommended to give fluids in 500mL bolus increments and to reassess lung sounds and breathing status after each bolus. If pulmonary edema ensues – the bolus should be stopped and the patient may need diuretics.

Another very important aspect of sepsis management is early antibiotics. The term empiric simply means antibiotics based on the best “clinical guess”.

The choice of empiric antibiotics will be selected based off of the patient’s signs or symptoms and where the likely source – since certain organisms are more likely from one source as opposed to another. This means the antibiotic regimen should be geared towards covering all likely gram-positive and gram-negative organisms. For sepsis – usually a broad spectrum antibiotic like Zosyn or a Carbapenem is combined with another antibiotic of a different lass – such as Vancomycin. Vanco is often added when the patient has risk factors for MRSA.

Correct regimen of antibiotics are important – however timely administration of those antibiotics are just as important. Antibiotics should be initiated within the first hour after suspecting sepsis – especially during severe sepsis or septic shock. This is because several observational studies have shown poorer outcomes with delayed antibiotic initiation. Once again, try to be sure you obtain both sets of blood cultures before you start the antibiotics!

As nurses, it is often up to you to choose which antibiotic to start first as both are often ordered concurrently. If you have both Zosyn and Vancomycin ordered – start with the broad-spectrum antibiotic first. But what exactly is broad-spectrum? This means heavy-hitter antibiotics that cover most pathogens – both gram positive and negative. Contrary to popular belief – vancomycin is NOT broad-spectrum. In fact, it has a very narrow spectrum specific for gram positive organisms such as Staph or Strep. Most cases of sepsis are from gram negative sources. This means starting the Zosyn first should be your priority. Additionally – Zosyn runs much quicker as a loading dose (4.5 grams over 30 minutes) – whereas vancomycin usually runs over 1.5 hours.

Sometimes when sepsis becomes severe – distributive shock can occur. This is termed septic shock. When this occurs – hemodynamic compromise is present.  If blood pressure remains low, the patient’s tissue perfusion continues to suffer and steps need to be taken to improve outcomes.

The patient may require more fluid if they are still hypovolemic after the initial bolus and can tolerate more fluids. However, the mainstay of treatment of septic shock is intravenous Vasopressors. For the most part – Norepinephrine (Levophed) is the go-to pressor for sepsis. However, other choices can be chosen based on clinician discretion (i.e. If very tachycardic consider Vasopressin which has no beta stimulation). Sometimes, multiple vasopressors may need to run concurrently to manage septic shock.

When a patient is in septic shock with hemodynamic compromise – they should have a central venous catheter inserted and/or an arterial line. Vasopressors can be started in a peripheral line, but a central line should be ordered as vasopressors can be caustic and damaging to the peripheral vasculature. Additionally, these catheters can monitor CVP and continuous blood pressures. If a patient is in cardiogenic shock and has inadequate cardiac output – cardiac inotropes can be added such as dobutamine or epinephrine.

Sometimes during severe septic shock, IV glucocorticoids may or may not help. Usually this is ordered if fluid resuscitation and vasopressors have failed.

Monitoring is the essential last step to sepsis management. Patient’s with sepsis can respond well to the regimen – or they can decompensate unexpectedly. Sepsis has a high mortality and the patient’s should be monitored very closely.

If the patient has any hemodynamic compromise and are on pressors – they should be monitored in the ICU for a few days until they become stable. Patient’s with mild to moderate sepsis should be closely monitored on a med-surg or telemetry floor. Continuous cardiac monitoring is essential during sepsis. The increased tissue demand for oxygen places the heart at a greater risk for having cardiac events secondary to the sepsis. It is not uncommon for someone with sepsis and cardiac comorbidities to have secondary myocardial ischemia and/or infarctions.

Blood pressure should be monitored closely – especially initially. Normotensive blood pressure should be maintained (SBP >100). However – maybe even more importantly the MAP (mean arterial pressure) should be monitored closely. The goal of MAP should be >65mmHg – this ensures adequate tissue perfusion (i.e. brain). Heart rate is also an important metric to monitor. Tachycardia is usually present – often in the 120s-130s during fever and sepsis – sometimes higher. While giving fluids – heart rate should improve. This can be somewhat helpful in monitoring the response of fluid therapy. Fever should be monitored as well – as sometimes it can become very high and increases insensible water losses and further propitiates hypovolemia. Remember a rectal temperature is preferred in those with suspected sepsis – especially the elderly. Urine output is also often monitored during severe sepsis – as secondary hypoperfusion of the kidneys can cause acute kidney injury and decreased urine output.

If the initial lactic acid level is elevated > 2 mmol/L, then a repeat level should be drawn in 4 – 6 hours. The lactic acid level should respond quickly to changes in tissue perfusion. CBC should be trended each day to monitor for resolution of the leukocytosis, bandemia, and/or thrombocytopenia. Electrolytes and kidney/liver function should also be monitored closely dpeneding on which abnormalities are present.

Last but certainly not least – the patient needs to be sent to the correct unit, needs the correct consults, and needs adequate follow-up. Almost all patients admitted to the hospital with sepsis will warrant an Infectious Disease consultation. Additionally, if they have any pre-existing comorbidities these consults should be made as well (i.e. cardiology for heart failure, nephrology for kidney disease).

Patients should have frequent nursing assessments and daily physician assessments, with close follow-up of labs. Blood cultures can start showing growth at about 24 hours. The pathologist will gram-stain the growth and give a report of “gram positive cocci” a similar description. This tells the clinician if they are on the right track and can guess at the offending organism. At about 48 hours, most clinically significant bacteria will be identified and a sensitivity is done to detect the bacteria’s sensitivity vs resistance to various antibiotics. Urine, wound, and sputum cultures have similar timelines. Antibiotics may be changed depending on the results. Remember, Infectious Disease should likely be involved in this decision.

And those are the six steps to sepsis management. Knowing the general steps to sepsis can help you as the nurse provide high quality care to your septic patients and help improve outcomes. As always, it is a collaborative team effort in offering you patients the best possible care.

Do you have any other sepsis tips? leave them in the comments below!

Use these FREE patient care organization sheets to keep your patient information nice and organized. What do you have to lose - it's absolutely FREE!