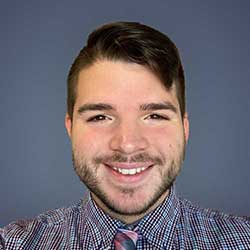 Ventricular arrhythmias like VTACH and VFIB occur in and out of the hospital. The only difference is, people aren’t hooked up to the monitors. So instead of catching the arrhythmia, the patient goes unresponsive.

VTACH and VFIB are HUGE deals, and these ventricular arrhythmias are deadly! Knowing how to recognize VFIB and VTACH is essential for any nurse in the inpatient or ER setting. 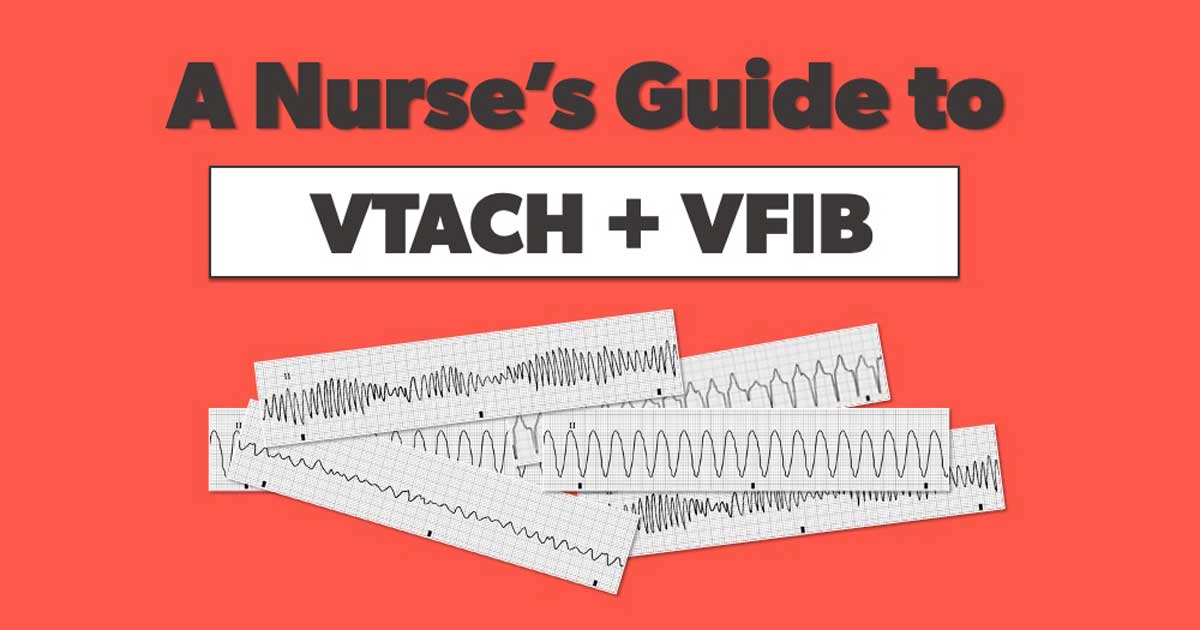 Ventricular arrhythmias are usually caused by coronary artery disease (CAD). Any lack of blood flow (i.e. a heart attack) will cause ventricular cells to be deprived of oxygen. When the cardiac myocytes become hypoxic, they become irritable and prone to firing when they shouldn’t, which leads to PVCs, VTACH, and even VFIB.

Other causes of ventricular arrhythmias include:

VTACH is a tachycardic rhythm originating within the ventricles. This produces very fast heart rates which may or may not be perfusing.

If they do have a pulse, the patient may be asymptomatic. More likely they will experience:

If VTACH is pulseless, the patient will go unresponsive and be a CODE BLUE.

VTACH essentially is a “run” of PVCs that just doesn’t stop, or takes some time to spontaneously stop.

There are different types of VTACH based on its morphology or how it looks. These include Monomorphic VTACH and Polymorphic VTACH.

They create the impulse, and the rest of the heart follows the lead.

Monomorphic VTACH will have the following features:

P waves are absent in 40% of cases, but sometimes can be seen in no relation to the QRS complex (termed AV dissociation).

This means you may be able to see superimposed P waves throughout the VTACH.

The morphology of Monomorphic VTACH will look different depending on which ventricle it originates from – the left or the right.

Knowing the difference between these doesn’t exactly matter because the management is exactly same. Just be aware that there can be more than one general “look” to Monomorphic VTACH.

This means that different ventricular cells or regions of cells are sending electrical impulses picked up by the rest of the heart. This leads to an irregular deadly rhythm.

Polymorphic VTACH has the following features:

Torsades creates a ribbon-like effect, where it looks like it’s twisting in on itself.

The most common polymorphic VTACH is called Torsades De Pointes which literally means twisting of the points. This is usually caused by a prolonged QT interval, often from electrolyte abnormalities or medications.

Torsades de Pointes is an unstable rhythm and often will degenerate into VFIB.

QT prolongation is the main cause of Torsades and is defined when the QT interval is >440ms in men and >460ms in women.

However, dangerous ventricular arrhythmais are unlikely to occur until >500ms.

QT prolongation is caused by:

Get my ECG Cheat Sheets!

Everything you need to know on how to read a rhythm strip!

VFIB is similar to polymorphic VTACH, but on a much wider scale. Essentially, all of the ventricular cells are irritable and it produces a disorganized chaotic arrhythmia that does not perfuse the body and is a CODE BLUE.

This will degenerate into asystole unless rapidly reversed.

VFIB is usually caused by CAD, with active or previous myocardial infarction being a primary cause. The other causes of ventricular arrhythmias like severe electrolyte abnormalities, hypoxia, or trauma (See Hs & Ts below).

VFIB has the following features:

Okay – so now we know how to identify these rhythms, but what do we actually need to do about them?

Well first off – know that you will NOT be dealing with this alone.

These situations are true emergencies, and a Code Blue or RRT should be called, and various other nurses and Providers should show up to manage the arrhythmia.

Secondly, the management of these emergent arrhythmias is extensively overviewed in ACLS, which hopefully your unit will enroll you in.

ACLS guidelines should always be followed, and you can review those here. But I do want to briefly outline 5 basic steps when dealing with a dangerous ventricular arrhythmia within the hospital setting.

Hypovolemia from hemorrhage or shock can cause cardiac arrest, although must be severe

Hydrogen Ions aka acidosis from severe DKA or respiratory failure

Toxins such as overdoses from opioids, benzos, TCAs, BB, or CCB

Thrombosis such as large pulmonary embolisms or myocardial thrombosis / infarction

Hopefully this gave you a solid understanding of V TACH and VFIB, and your role as the nurse to help manage these deadly ventricular arrhythmias.

If you want to learn more, I have a complete video course “ECG Rhythm Master”, made specifically for nurses which goes into so much more depth and detail. 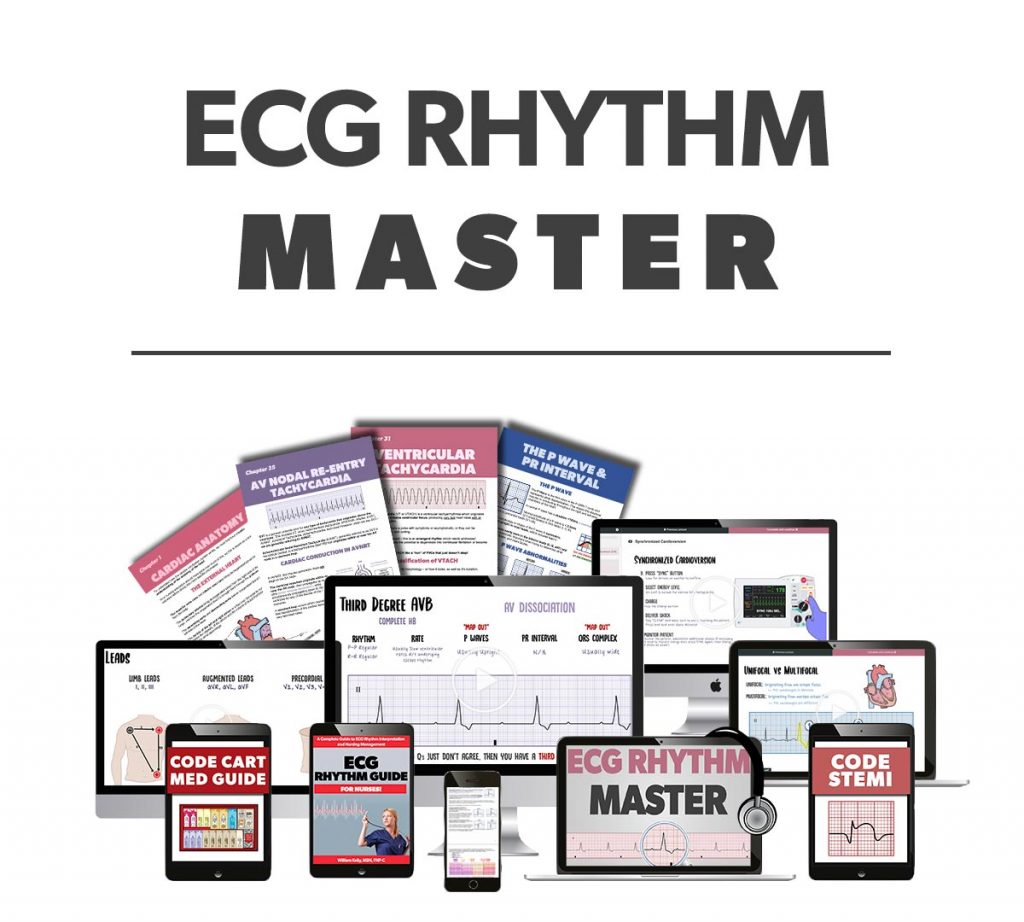 With this course you will be able to:

I also include some great free bonuses with the course, including:

Check out more about the course here!

Ganz, L. I., Buxton, A. (2020). Sustained monomorphic ventricular tachycardia in patients with structural heart disease: Treatment and prognosis. In UpToDate. Retrieved from https://www.uptodate.com/contents/sustained-monomorphic-ventricular-tachycardia-in-patients-with-structural-heart-disease-treatment-and-prognosis 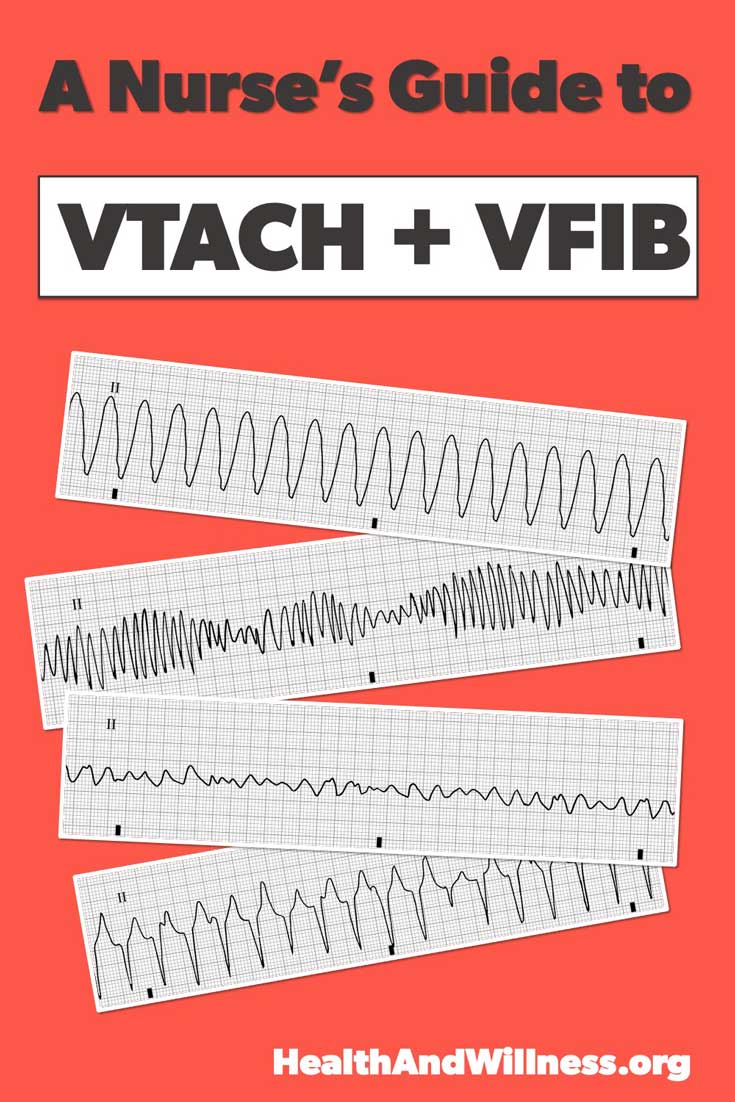 this article is pretty helpful,, I hope to receive more article related to nursing.

There will definitely be plenty more! 🙂 Glad you found it helpful!

Get the ECG Rhythm Interpretation Guide!

Get the FREE ECG Rhythm interpretation cheat sheet! Learn how to interpret ECG rhythm strips, and all about various different arrhythmias in this 14-page PDF!